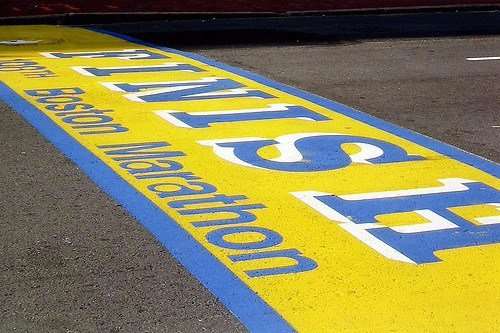 There are some things that children should not have to know, depending on their age.  I guess that's where the term age-appropriate comes from and there is a reason why it exists. It seems recently, again, there has been a spate of news stories that fall directly into this category. The Boston Marathon bombings have now rocketed to the top of that list.

I first heard about it on Twitter.  A tweet from a parent writing something that ended “I am sick to my stomach” #Boston.

By the time my 15-year-old arrived home from school yesterday at 4pm, the story was firmly entrenched in most of our psyches.  Driving him to his ball hockey game an hour and a half later, he turns and says to me, “did you hear about what happened in Boston”.  Our journalistic genes notwithstanding,  he is an avid news and current events follower and so of course I should have remembered that he would have known all about this horrific event. I kept listening and weakly offered, “what have you heard?” He rhymed off a slew of facts and information about the bombings, described some of the video of 'flying limbs' he had seen online and then said, “boy do we ever live in a sick world.”

How would I respond? What could I say to a young boy in the throes of being a young man that would help him wrap his head around this unspeakable tragedy.  That would somehow make me sound like I understood these bombings as well.  I put on my best parenting hat and replied.  “I want you to remember something very important.  Goodness will always prevail in this world, despite the evil that may exist.  That is why it is so important how we treat each other.  'Doing the right thing', there was even a movie by that name, I think.  Remember that.  It starts with how we treat each other. Always strive to do the right thing, even when that may seem difficult.”

He listened intently, clearly perturbed by the state of humanity, and nodded.

My response to him came out of me in a split second.  I have no idea what a 'crisis expert' would respond.  I answered what came naturally to me, based on my understanding of my son.  Period.

When my 13-year-old got into the car, the conversation briefly returned to Boston.  He said to his older brother, “I thought I heard something about it, but mommy took the laptop away.”  Yes, I did.  It was my instinct.  Why did he need to know about it.  My naive self forgot again that he can and will get the full gruesome details sooner rather than later.  But at that moment yesterday, I didn't think he needed to know about it.  Nor did my 9-year-old daughter.  Parenting fail?  Perhaps.  Age-appropriate information?  Absolutely not.  Gut instinct?  Definitely.

All three will undoubtedly hear about it in school today. The morning paper, which will be arriving any second now, will be chock full of photos, edgy headlines and links to graphic online video that none of us — children or adults — should have to see. Let them learn about it in due time. We will likely be discussing it a the dinner table this evening and perhaps by then my husband and I will have a more enlightened answer to give them.  I doubt it. The answer I gave, upon reflection. is the best one I have. The only thing I would add, is “let us think about and pray for those families and people affected.”

There are some things that children should just NOT HAVE TO KNOW. Depending on their age.  That's my opinion and I am sticking to it, despite the age of information overload that we live in.

There is also a huge part of me that understands how these types of 'breaking news stories' unravel, having worked in this industry for more than two decades.  In the immediate aftermath of a huge story like this one, the actual facts are peppered with wild speculation, rumour. heresay, and retractions all over the place.  The twitterverse being a huge proponent of this behaviour and reality.

In my mind, I was thinking, let them hear about it when the dust has settled and we can all speak in FACTS rather than falsehoods.  That is the last thing that they need.

It has been a brutal few days for parents everywhere whose offspring with inquiring minds have heard about the S-word, the H-word and now the B-word.

Of course, at one point children will need to understand why 'suicide', 'hangings' and 'bombings' occur.  The old-fashioned and protective part of me just wishes if they would hear about it as adults, if ever.