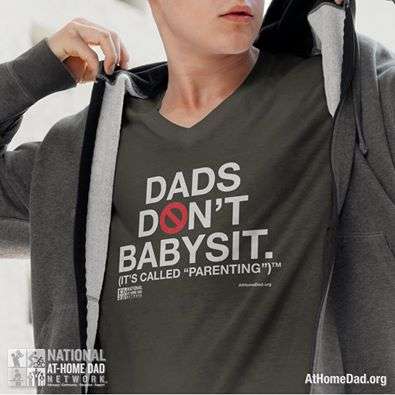 An advocacy group representing fathers who are their family’s primary caregivers is in the spotlight this week for its “Dads Don’t Babysit” campaign.

The grassroots project went viral on social media after a Reddit user wearing a “Dads Don’t Babysit (It’s Called “Parenting”)” t-shirt posted his picture on the site under the heading “Important Message From a Dad to Society.”

Since being posted, the photo has generated more than 3000 comments, including from men who say they can identify with the stereotype often imposed on them when they look after their kids.

“It hurt really bad when I was a new, stay-at-home, dad and people would say or ask about me babysitting,” one user wrote. “My wife’s job had 70% travel and she’s going back to school for her masters, and we were in a new city with no family and only a couple friends, so I was “on” 24/7.

The organization behind the t-shirt is the National At-Home Dad Network, a non-profit group that seeks to “empower fathers and champion a culture that recognizes them as capable and competent parents.”

You can see the photo of the t-shirt below:

Keeping Up in the in Era of Social Media