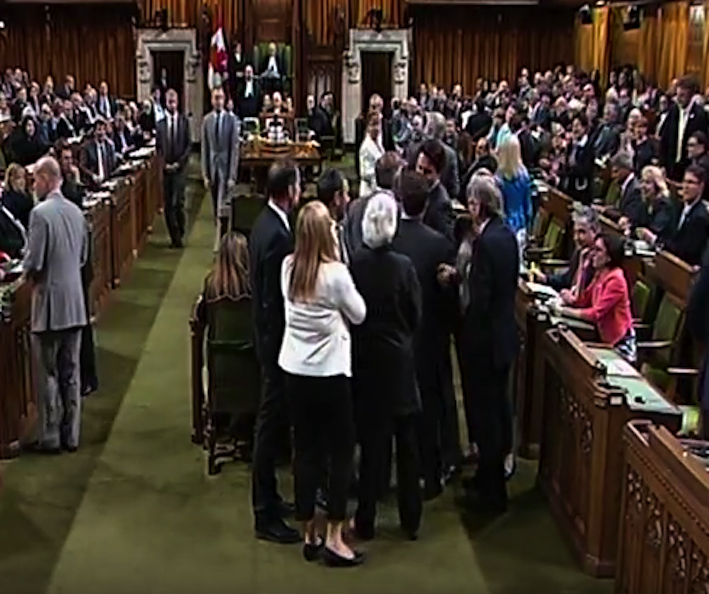 Will the real grownups please stand up?

It seems everywhere you look these days politicians are behaving badly, throwing Twitter fits, or in Wednesday’s case – actual fits – in the halls of government power.

In an unprecedented move ahead of a controversial vote to limit debate on the government’s assisted dying bill, Prime Minister Justin Trudeau charged across the House of Commons and grabbed a Conservative MP on the arm while unintentionally elbowing a female NDP MP in the process.

A commotion immediately ensued, resulting in NDP Leader Thomas Mulcair screaming “you’re pathetic” at Trudeau when Trudeau returned a second time to the other side of the aisle.

So much for those “Sunny Ways” huh?

Trudeau apologized almost immediately for the incident but that didn’t prevent the tsunami of opposition anger and media attention brought on by the melee. He also spent a good part of Thursday trying to make amends to little avail.

By now, many of us are desensitized to brash political tactics thanks in large part to an unnamed American politician and his penchant for insults and inflammatory statements. But here in Canada, we pride ourselves on a higher standard of discourse, even to the point of being a bit smug about it compared to our Southern neighbours.

Until now that is.

In a previous post regarding the U.S. presidential race, I asked how we’ll one day explain to our children that bullying is wrong when America is poised to elect a master intimidator to the nation’s highest office.

“Electing him would signal to our kids – many too young to notice now – that the best way to succeed in life is not through diplomatic means, but through insults directed at anyone who stands in your way,” I wrote at the time.

Are we headed down a similar path with our own politicians? Will Canada’s elected officials be relegated to the long list of deviant celebrities acting as poor examples to the public?

Seeing yesterday’s events unfold, I truly hope Canada isn’t on a pathway to bullying politics. Our kids need and deserve role models in office who emulate the behaviour we as parents try so hard to instil in them everyday of their lives.

C’mon politicians, it’s time to behave like grownups because right now our children are behaving better than you.

When a Bully Runs for President