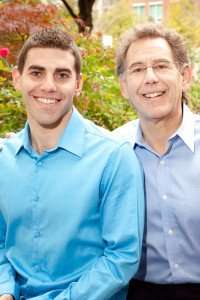 I have always been secretly amazed by people who willingly disclose the intense private details of their family life to the masses.  The more personal the detail — the greater my surprise. There are those of course who engage in such activity simply for notoriety, the enjoyment of shock value or some other self-serving purposes (see Jerry Springer).  Then you have others who consciously decide to choose such a path for the betterment of others and by default, themselves.  Enter Jeffrey and Michael Eisen.

The father and son, by all accounts, endured a 'difficult', often troubled relationship with many pitfalls.  The learning they did about themselves and each other occurred at different points. However, it was, by their own admission, the act of writing their book:  “Empowered Youth:  A Father and Son's Journey to Conscious Living” that they learned the most about their relationship.

In interiewing the Eisen men, I was struck by how candid each was about what caused their parent-child relationship and communication breakdown and how they worked — for years — to repair it.  Certainly not an easy admission and one that is rooted in the realization of failure — of the individual of the relationship of the communication vehicle or lack thereof.

Dad Jeffrey, readily admits that his desire for control was at the heart of strained communications with his children and especially his free-spirited son Michael.  It was only after Michael 's deep downward spiral into depression and a nervous breakdown that a full recognition of the symptoms and problem began to occur.

It's an interesting question – how much control is appropriate for a parent in a parent-child relationship?  Many traditionalists will suggest that parents need to assert control in order to adequately perform their parenting duties.  I happen to believe that control, in moderation and within reason as a parent makes sense.  All too often today, I see parents who have relinquished full control to their children and suffer dearly with respect, discipline, accountability, communication issues.  Firm but fair nicely sums up my personal belief on control as it pertains to parenting.  The key is to start early with that mindset and remain consistent.  There are plenty of parents today who use the 'I'm my child's friend' approach.  While aspects of this strategy have merit depending on the age and situation of the child, I question the overall goal here.  But I digress.

Jeffrey Eisen's personal journey of self-realization likely involved delving deep into his need for control.  It was in the course of writing a book with his son, that he gained perspective on what that meant and how to better manage it.

I commend the Eisen men for their desire to persevere in repairing their relationship, which Michael says took almost two decades. It is also heartening to note that these gentlemen are so eager and willing to share with others who may face similar relationship challenges in such an open and revealing way — coming to terms with a topic that is both a difficul;t to endure, let alone write about.