It has truly heartening to watch from so many different vantage points.  As a journalist, a voter, a mother, wife, entrepreneur, and plain old observer.

The genuine outpouring of respect and admiration for Jack Layton, from across the country, has superceded all barriers.  Just like the man himself.  So rare, so refreshing.

Young and old, political friend or foe, different cultures, mother tongues, you name it — the outpouring has been unabashed.  Just like the man himself.

A few weeks ago I blogged about Jack Layton after reading a biography on him and being moved by the life he lived, the high goals he set and the respect he commanded — all while never forgetting where he came from, and remaining unassuming.

What has struck me the most, and there has been plenty to be moved by in this remarkable story, is how principled he was from beginning to end. 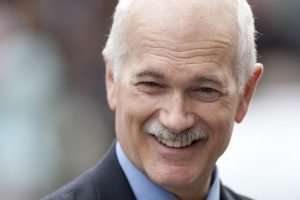 Growing up in Toronto, I recall Layton as a councillor with his puffy locks and big glasses.  Always championing the little guy.  Never losing sight of those things closest to his heart from his days in local government all the way to a national stage.

He didn’t pretend to be genuine — he was.  He didn’t fashion his beliefs and principles according to the politics of the day — he remained steadfast to them and never wavered.

What’s remarkable is that in the fast, fickle world of politics he managed to maintain his ideals and be himself.  An achievement indeed.

As someone who has always ‘done her own thing’, I appreciate Jack Layton’s ‘renegade and maverick ways’ though I don’t think he would have appreciated those monikers.  He did what he was passionate about and was genuine about it.  Enough said.

“Always do your own thing,” I’m always telling my kids.  “Use your own brain.”  “Think before you act and accept the the consequences.”  Some of them may understand this concept, my little one, maybe not fully yet.  However…the other day after I asked her why she didn’t put syrup on her pancakes she said, “Mommy I don’t like syrup.  I’m different.  And that’s okay.”

What a rich legacy Layton has left behind, as a politician… most importantly has a man.  One that resonates on so many different levels.

And so it should.