My Apologies, But Your Manners Are Absolutely Appalling

The blog originally appeared in Huffington Post Canada in May 2016

Manners are increasingly taking a back seat and it shows. What stuns me is how completely oblivious people are to their own lack of manners in a given situation, but how quick they are to point out ill-mannered others. Time to take an etiquette selfie. You might be aghast at what you see.

Few things irk me faster than what continues to be par for the course on the roadway these days. Number one on my list of pet peeves? People who are unable to lift their right arm up for a nanosecond or longer to acknowledge or thank a fellow driver for a courteous gesture i.e. letting another car in when no one else will, allowing a lane change to occur when countless other cars have sped along completely oblivious, and the like.

Do they NOT teach this in Driver’s Education anymore? If not, why not? Or are we as a society continuing to drive down the ugly slope of poor, if not, non-existent common decency and basic etiquette (only when it suits our needs). Are we in the process of raising Neanderthals?

This incorporates everything from holding doors open, saying thank you for that door being held open, saying pardon, waiting till everyone is served before digging in, waiting til someone else is finished speaking before diving in, putting an item back on the shelf or wherever it came from in a store after you’ve looked at it, not interrupting someone else, RSVP-ing to an event you’re invited to as asked (one I absolutely do NOT understand), allowing a kid to scream their heads off in a public place.

Did I mention saying ‘Good morning’ whether in person or on email? None of these small but significant acts of etiquette will save a life, but goodness do they speak volumes about the character of an individual, in my opinion.

Manners are increasingly taking a back seat and it shows.

In the competitive, rise-to-the-top-first-if-you-can-at-the-expense-of-everyone-else age we live in, manners are increasingly taking a back seat and it shows. What stuns me is how completely oblivious people are to their own lack of manners in a given situation, but how quick they are to point out ill-mannered others. Time to take an etiquette selfie. You might be aghast at what you see.

Just ask Bob Rae about his unfortunate grimace during Prime Minister Justin Trudeau’s speech about former PM Stephen Harper and his contributions to public life. Even if that is what you were thinking, save it. Saving grace here is Rae did apparently apologize. And yes, lack of apologies, in general, is another fine example of lack of manners.

My favourite is when you’re signalling to change lanes as an example, and people won’t let you in, whipping by instead, including those with a religious symbol swaying from their rear-view mirror or better yet a sticker declaring their ‘religious values’ on the back of their car. Classy. 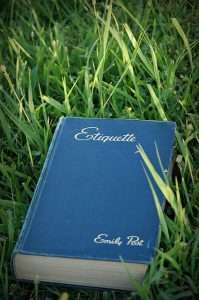 Etiquette is taught and learned behaviour. It doesn’t come out of the clear blue. It is also behaviour that must be modelled by parents, if it is to be learned, appreciated and replicated by children.

And yes, different cultural groups have different customs and perhaps different views of etiquette, but the general basic rules apply, and are likely universal, aren’t they?

I am certainly no saint. One of my biggest flaws is looking at my blackberry when I shouldn’t be, for example, during a meeting. Not a huge crime, but definitely not always a display of good manners. I’m working on it and progress is being made, I’m happy to report!

When I’m in the car with my family and especially with my children and encounter someone who doesn’t say thank you on the road for a clearly courteous gesture, I will likely say “do not be that person” to whomever is in the car. Especially, new or young drivers — of which my family has one and a half. IT IS RUDE and whether we want to believe it or not, we will continue to perpetuate other kinds of rude and worse behaviour. No need to go down that road, is there?

The movement towards greater acts of kindness (itself kind of curious because it should be the rule rather than the exception, but whatever), starts with small gestures that emanate from consideration for others, which can be traced back to good manners, as I see it.

Not a lot to ask, but boy does it make a difference when you are a receiver of courteous behaviour and certainly if you are doling it out.

Making time for manners — which is an inconsequentially small amount of time after all — should be a priority, young or old, regardless of where you come from.

In the age of being ‘on-camera’ virtually non-stop, good manners are likely even more important. Goodness help you if you’re caught on someone’s camera being the poster child for ‘rude’.

Of course it’s easy, like many things these day, to follow the tide and give in cause you feel like you’re on an island, but like most things that are important, it is WORTH the effort and will pay dividends and reap benefits you never thought possible. You get back what you give, plain and simple. And you certainly cannot expect your children to set positive examples if you are doing your own thing, as a parent.

Yes, we are all busy, apparently — no time for many things including, regular face-time with our loved ones, meaningful open dialogue that involve the spoken word with those we care about, and the list goes on. But making time for manners — which is an inconsequentially small amount of time after all — should be a priority, young or old, regardless of where you come from.