Parenting from The Great One

Even as a youngster I was always struck by Wayne Gretzky’s humility.  To me it rivalled his brilliance on the ice.  He let his work do the talking.  The Great One spent no time promoting himself.

A few years ago, I had the opportunity to interview him — wow, what a presence.  Unlike many athletes, he listened intently to the question, and provided an articulate, thoughtful answer.  He cared.  Truly rare.

These days, as a father of five, Gretzky has retreated to family life in Los Angeles.  Perhaps another remarkable athlete in the lot, perhaps not.

Yesterday, I read a fabulous article on Gretzky and is oldest son, 18-year-old Trevor, a skilled baseball player. What a wonderful read.  The beautifully-written article by Richard Griffin, baseball columnist with the Toronto Star, provided a rare glimpse into the life of Wayne — the father.  It also  conveyed a child’s private thoughts about his parents.  Powerful.

Two quotes really struck me and speak volumes about Wayne Gretzky, the dad.

“I don’t really get too high because my dad, really since day one has told me to stay modest and stuff.”  Trevor said.  “He’s really pushed not to think you’re better than anybody else.  I’ve learned so much just watching him.  He really doesn’t have to tell me.  I just watch him and I can learn from him.”

Translation — parents behaviour is a powerful force in a child’s life.  Kids model behaviour – both good and bad.  Humility is a virtue.

The other words of wisdom come from The Great One himself, speaking as a father: 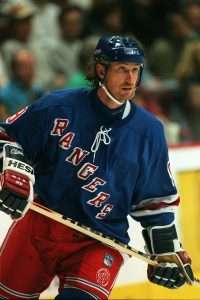 “I always tell my kids, ‘You know what?  The biggest thin you can have in life is passion,'”Gretzky said.  ” if you have a passion for going to school and becoming a doctor or if you have a passion for being a good hockey player or a good baseball player.  What happens with passion is that you take that extra step, you put in that extra work, you put in the extra time because you have a dedication and a love for it.  People come up to me and say, ‘Could you tell my son how many hours you used to practice?’ I say, ‘No, I can’t tell them because I didn’t think I was practicing.’

So so powerful.  So so true.  Passion is a precious gift.  Finding it, a rare gem.

I read both quotes out loud to all three of my kids.  They listened closely because of the preamble:  “This is what Wayne Gretzky says to his kids.”  Pindrop silence.  Both my boys who are 13 and 11 read the article and were moved.  My 7-year-old daughter is working her way through it.

As a parent, apart from the obvious, I translate the key points in this article to two things — teaching and learning modesty is an important life lesson that parents (teacher) and child (student) will never regret.  That great lesson needs to be spread.  And secondly, expose kids to everything you can as a parent, within your means, to help them find their passion — music, art, sports, science — whatever.   For some, it’s obvious, for others, finding their passion may take longer and be buried, but you know it’s there.  Once found, it is truly a revelation.

The other great lesson from this article is that we are all learning everyday — especially as parents.  Sharing our experiences with each other is a richly rewarding way to grow as a person, father or mother.   As a father of four recently told me, “it still takes a village to raise a child.  It’s just that the village today is different.”

Article:  “The Next 99:  Gretzky tells son to find his passion”